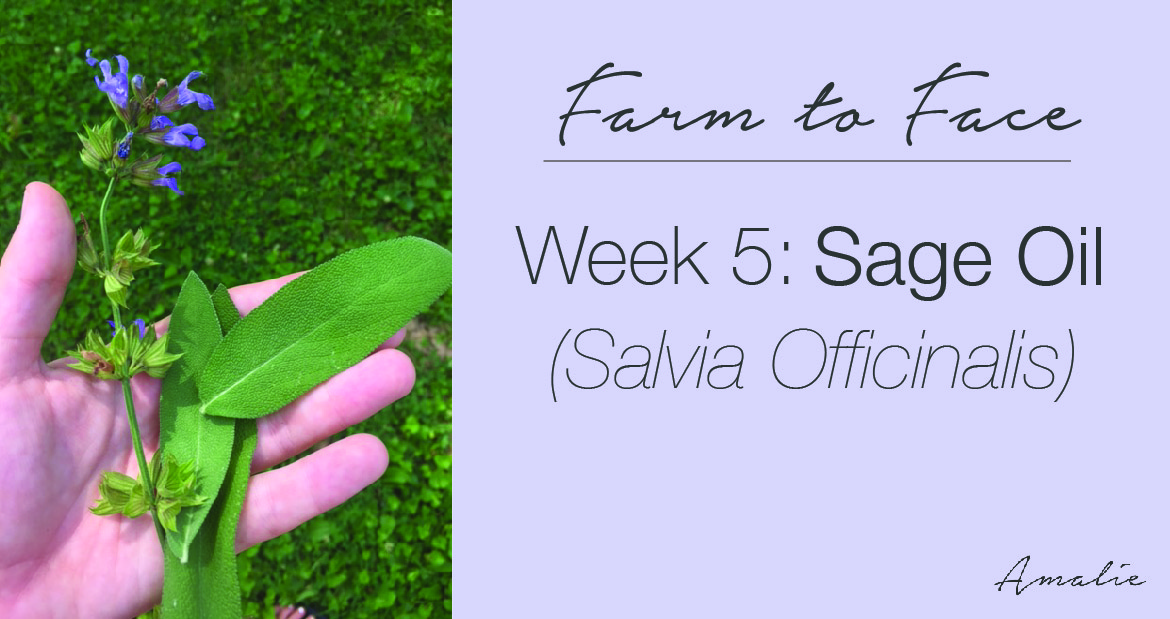 This week we’ll cover sage oil, also known as salvia officinlis–how to make it and use it and why. Although sage is most known for it’s use in food as a spice, in the last 5 years sage has become a topic of interest to scientists (we’ll dive into that more today), so the future of sage is looking up..very quickly. Though you won’t find it in many beauty products on the market today, we’re happy to bring it to you in all 3 of our Farm to Face products. Keep scrolling to find out why. Sage is a lovely plant. The leaves are gentle, like Lamb’s ear, and fragrant. When they’re new, they carry oils and a certain stickiness–a resin–that gets on your fingers when you rub the leaves too hard.

It’s been used for thousands of years in ancient medicines, especially in the Middle East, where dozens of types of sage can be found. On top of treating almost every disease you can think of, sage is also burned to clear people’s auras and cleanse people, spaces (source).

Why We Chose It: Sage Oil (Salvia Officinalis)

As a skincare ingredient, sage is basically unknown.

Primarily, I chose sage for it’s ability to cleanse acne.

Did you know that sage can help clear up acne? Most people–including a lot of scientists and skin care experts right now–don’t. That’s because a constituent of salvia officinlis–rosmarinic acid–has just started to enter the natural acne scene.

Although a 2013 study showed that more research needed to be done to understand the ability of rosemary and it’s 3 constituents to fight p. acnes (propionibacterium acnes, the bacteria that causes acne), a follow-up study in 2015 showed that rosmarinic acid–separate from the other 2 constituents of rosemary–was highly effective in fighting p. acnes and should be used as alternative to current antimicrobial treatments (source), especially with growing resistance to anti-microbial treatments (yes, that was me! count me in!)

For these reasons, I think sage is awesome. Some other players don’t agree (source), but then again the research is fairly novel and developing; there’s a lot to keep up on! I hope to continue to see sage embraced as a good source of rosmarinic acid, and therefore a great anti-oxidant, anti-aging and natural acne regulator.

Where We Got It: Salvia Officinalis

This specific strain of sage has been in my family for 4 generations. My great-grandmother gave it to my grandmother before her death. My grandma has tended to it in her garden for 5 decades, as has my mother; we all live nearby each other and take care of each other. This has been especially true of my grandma’s gardens as she gets older – she turns 93 next month and she still tries to do it all by herself! Now you know where I get my spunk 😉 I used to overlook the sage: how would I use it? I thought. There’s too much of it. We rarely cook with it, why does it take up so much of the garden?

This year, I found my answer.

How We Made It: Salvia Officinalis / Sage Oil

Of course I was a newbie to extractions, so I followed the Folk Method for everything this year (no more surprises, in case you were wondering). I’ve since learned that for increasing the rosmarinic acid concentration, there are better methods of extraction (source), but I’m not convinced that supercritical CO2 extraction doesn’t come with some not-so-happy skin side effects. For the sage oil extraction, I used two types of oil: organic jojoba oil for one type and Jamaican black castor oil for another. I later did another batch with organic castor oil.

Black castor oil has been used for centuries for hair and skin, including inflammation, rashes and yes, acne. In fact, it’s great at growing lashes and brows, too; that’s why its the #1 ingredient in WINK (here).

Castor oil alone is very, very viscous. It’s sticky. Did you know that a pure nut oil could be sticky? Well, it can be. This is the most viscous oil that I’ve ever encountered. Just look at how thickly it coated my fingers during the manual extraction: If you’re wondering why I chose Black Jamaican Castor Oil, it’s actually been more effective in side-by-side tests (in-house) for growing lashes, and it tends to be more pure on average. Other sources of castor oil are easier to water-down without being detected, and I am sure that they are; every source of castor oil I’ve worked with that wasn’t black castor oil has been much, much less viscous. The only difference–in theory–is that with black castor oil, the castor beans are roasted first before being cold pressed, so their is the additional ingredient of ash, from roasting the beans. That shouldn’t affect the viscosity to the level that I’ve experienced. So from experience, I am postulating that some or most of the regular castor oil on the market is cut. It’s not science, it’s common sense.

Additionally ash contains sulfur, which has additional skin benefits (yes, face ash is a thing). And though castor nut ash has not been studied for acne like volcanic ash or seaweed ash, I suspect that there are additional acne-fighting benefits in there.

As for the Jojoba oil–you’ve heard me say a million times how great it is. It’s a moisturizer, occlusive agent, and mimics the skin’s natural sebum production, making it both a great oil production regulator and skin-penetrating ninja. Jojoba oil, my love.

How We Used It: Salvia Officinalis / Sage Oil

I just talked pretty in-depth about how rosmarinic acid and black castor oil are great for fighting acne, so you know where this is headed.

Sage is the star of CLARITY (here)–our OCM (oil cleansing method) face wash for adult acne. I have been testing CLARITY myself for 6 weeks, (here’s where and why I started the test–and no, it’s not for the sales) and will reveal the results on the Amalie Blog later this week. The face oil should be used at the end of the day as a first line of defense against acne. Warm a dropper full of oil on your fingertips and rub it all over your face, massaging it into the skin; keep massaging in for 6-8 minutes, preferably on a freshly steamed face or with the shower running, to get the steam. Afterwards, use a traditional cleanser (I use the Milky Jelly Cleanser by Glossier, here) to complete the 2-step cleansing method. Follow with any acne-fighting products (like Paula’s choice BHA, here)  to continue treating the acne, after naturally cleansing.

Some people cleanse only with an oil cleanser and that’s fine, but for more acne-prone skin, you’ll need to 2-step cleanse like you’re from Korea 😛

To save money and extend the use of the product, cut with up to 50% organic jojoba oil. That’s up to you.

Sage can also be found in smaller amounts in REWIND (here) and CALM (here). As an anti-inflammatory and anti-oxidant, we really couldn’t resist. 😉


This blog contains one or more affiliate links.